Inspiring The Show: David Mogolov on his show Eating My Garbage

In this new series Inspiring The Show, I talk with solo performance creators about how they came up with the ideas for their shows. What was their inspiration and how did the process unfold as they crafted that original notion into a one-person show.

First up, David Mogolov and his 2014 show Eating My Garbage. 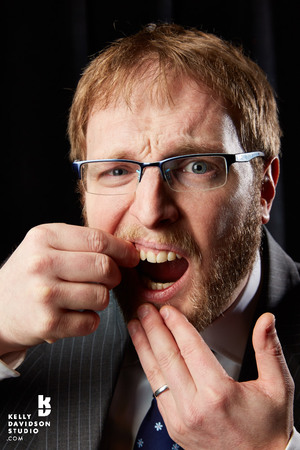 David Mogolov has been writing and performing comedic monologues in Boston since 2002. His shows are known for blending the personal and the political, and for smart, surprising insights that emerge through near-constant laugh lines. His shows include One Night at T.F. Green (2003 Single File Festival in Chicago), There Is No Good News (FRIGID New York 2011), and Dumber Faster (FringeNYC 2012) and Clenched (Dallas Solo Fest 2016). His work is published by Indie Theatre Now.

His show Eating My Garbage finds David dumbfounded by a call from a political pollster who sounds suspiciously like Laura Linney. He searches himself for a reason to believe the nation isn't utterly doomed. When he can't quite think of one, he turns to irrational reasons. That's when his search gets more promising.

NYTheatreNow wrote of the show, that it:

...looks at the fragmented state of the Union with wit and intelligence and  a wry sensibility that blends the naive optimism and weathered cynicism that is so characteristic of American in the 21st century.

In his own words, here's David thoughts on how his show came about...
#   #   #
Eating My Garbage could have been a disaster of a show, but it came together mostly because I was open to taking new ideas into it and jettisoning the ones that were personally interesting but probably bad theater. One critical element of the show came as a complete surprise, a total coincidence that arrived when I wasn't even thinking about the show.
But as far as the foundational ideas, they came from reading. Very often, I start with personal stories and explore the connections between them, but this time the ideas were very much "ideas" in the classic sense. I was working toward a show called Carry the Two, and the original concept is slightly muddled in my memory, perhaps because it was very muddled as a concept. I was trying to marry three different strands of thought:
1) For my previous show, Dumber Faster, I had done a lot of reading about psychology, particularly about how we make and justify our decisions. All of that reading was in my head, and many of my ideas at the time were rooted in that space.

2) For a few years, I'd wanted to look more at externalities, the economic idea that our activities have costs other than those we pay directly, costs that typically get pushed to society as a whole (pollution is the typical example).

3) Separate from that reading, I was really obsessed with the idea of tribalism. Everything in the news then (I was writing from late 2012 into late 2013) seemed to get stuck in these debates rooted in what best matched to our understanding of our group identities, which were shielding us from the hard work of owning our individual actions and inactions.
The problem is, I write and perform comedies that are rooted in personal stories, so I needed to anchor these things firmly in engaging, funny stories, rather than in lectures. For externalities, I had an easy surface-level comparison that I knew was funny, but I didn't think was personal enough to really build a show around: the smell of Subway sandwiches. Subway, simply by being in business, creates an externality in that the entire neighborhood around a Subway location takes on that odor.
The show ended up containing a nearly ten-minute comic bit about that smell. Perhaps it's absurd that about a fifth of the show was spent there, but on balance, it seems right. While the tribalism bit fell away entirely and the externalities element became very short, other psychological and cultural ideas crept in to give it all purpose, and offsetting that and contextualizing it in the ridiculous suited my style and brought the audience along.
The other essential, fundamental element of the show was entirely unplanned—an uncanny coincidence (learning from my brother that he'd had a personal encounter with a celebrity at the center of the emerging narrative) allowed me to tighten the entire thing even more firmly into a personal narrative. It required a major structural change, introducing more personal stories, and jettisoning some more ideas I'd thought were important, but it absolutely created a better, tighter, more entertaining show that was much more humane and funny.
#   #   #
For more info on David and his solo shows, visit... HERE
#   #   #
Leave a comment. If you are a robot or a blatant marketer trolling Blogger, then you will be deleted. Humans only, please.

Welcome! Glad you have stopped by. This site is moderated by Brad McEntire, a solo performer, playwright, improviser and stage director based in Dallas, Texas.
.
THE SOLO PERFORMER (TSP) will strive to be a go-to point for information on solo theatre, from historical profiles, interviews with contemporary artists, book reviews, essays, tips, techniques, perspectives, festival listings, etc.
.
TSP is a collaborative holding place for ideas. Right now, the site is filled with whatever Brad finds and finds interesting about solo performance. It is essectially a one-man job (okay... pun intended). If you are a solo performer or a theatre writer and want to contribute, the welcome mat of out. Please drop a line. Email link at bottom of the page. Enjoy!

"It is necessary to have a point of view about the world which surrounds you, the society in which you live; a point of view as to how your art can reflect your judgment... You must ask yourself, 'How can I bring all of this to the statement I wish to make in the theatre?'"
~ Uta Hagen